Ever wonder what happened to your favorite G.I. Joes after they got out of the army and on with their lives? The 90's were a brave new world to most of these relics of the Reagan era. Luckily Smash The State is here to let you know. 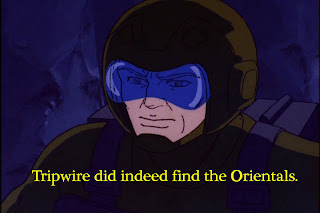 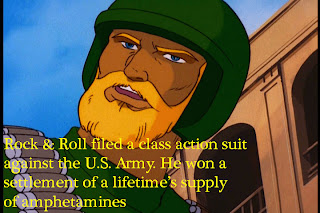 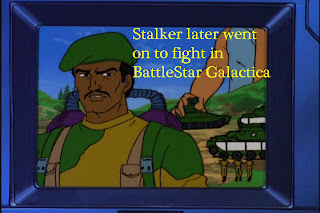 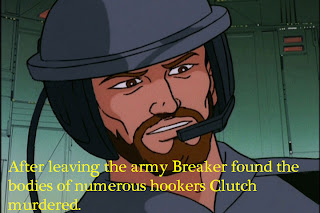 As you can see, only one of them wound up being able to cope with life after the army.
Posted by Johnny Turk at 9:30 AM 2 comments:

Labels: C'mon down to the concrete beach, Clutch is probably in jail, Tripwire was responsible for Me Lai, Unfunny blog posts

Or: THIS IS WHAT HAPPENS WHEN YOU GET DEEP IN THE GAME (The life and crimes of James McCullen XXIV)

Some day our activity book will be done.
Posted by Johnny Turk at 12:01 AM 6 comments: 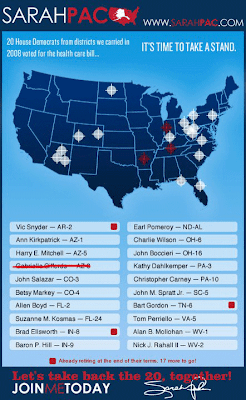 Tom Jacks Memorial Podcast #2: What Did We Learn?

The only black author of STS knows you don't have time to listen to an hour podcast. Therefore, I have summed up all the important facts from this episode to save you some time.
-Moon Knight's life, while crazy, mirrors that of Jack187.
-Turk's girlfriend is a highly skilled thief.(plz note: she's white)
-When you think about it, old people are a lot like joe collectors.
-3rd party transformer armors and products are NOT the best.
-SMASH THE STATE NEVER LOSES
-Black guys are sometimes bald.
-Big Lob is NO ONE'S sidekick!
-Lord Raven is a hateful homophobe.
-Snake Eyes is a "Phoenix". (Meaning, he takes online classes at a second rate online college)
-2 Gun Larry... 'Nuff said.
-Rainbow Brite promotes slavery
-Tom Jacks is in fact, REAL.
-D.Verberg REALLY cares about gloves.
.....
Don't Kill Yourself.
Posted by Future Negro at 9:24 PM 3 comments:

Honoring the passing of a STS hero


Sorry about your fence that one time Gerry
Posted by Dr. Henry E. Miller at 7:07 PM 4 comments:

Labels: listen to that fucking sax man, the cities dance makes you feel so cold, you thought this was gonna be about jack 138

Of course these only come from the Smash The State Message Board!

Smash The State & it's Dip-Set Byrd Gang Taliban, are the largest percentage of G.I. Joe fans who aren't stupid fucks, obsessed with internet memes that went out of date years ago (Fact: You will find at least 2 Chuck Norris fact signatures and 1 Heath Ledger's Joker Avatar on a G.I. Joe message board)

Looking back on Mike "De Aço Fountain": De Aço was a dick, but damned amusing in restrospect. Maybe he realized early that toy collecting is about being the biggest spend-o-holic nerd in a tiny pool full of other nerds. The early internet days of praising army builder nuts and their rows of figures was just that, patting people on the back for simply having spent more money than everyone else.

Truer words were never spoken: I think I like trolling just as much as joes at this point.

Felonious Monk was a heroic jerk and probably owns a Miró painting: All this type of shit became pretentious when geeks started calling it "art". I met a game developer who actually referred to it as "art" as well. Apparently, if writing code can be art, anything can be art. I consider repacking an art form along the lines of that shit Christo does. It's making a statement about the futility of consumer culture at large and the insignificance of the geeky-fuck subculture in modern society.


Talking about the weirdest fucking dude on HISSTANK: I fucking love JROD. Talking about him is like the highlight of coming to the board now. Thing is...I bet that guy lives the happiest life ever. He loves his ugly wife has a hobby and friends! We could all learn a lesson from this fucking guy. He may be the one happy person on the planet. Why are stupid people so damn happy?

General Hawk (Yeah that guy with website and a lot of Dio Stories) said this: This probably sounds funny coming from a guy who devotes way too much time to this shit, but I do think a lot of folks take this way too seriously and need to have more fun with it.

The best example of this recently was at Toy Fair in February...someone stood up and asked the Hasbro panel (with reps from Star Wars, Joe, Transformers, and Marvel) if they saw this stuff as "toys for kids" or "adult collectibles", and every rep was adamant that this stuff is "toys for kids".

The whole audience looked crestfallen. I thought it was great. 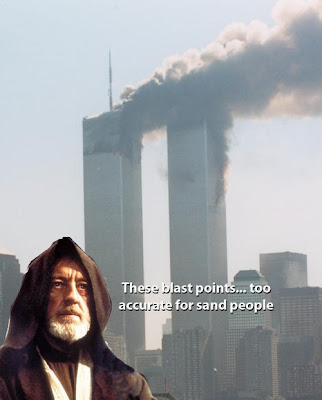 A conversation on Patrick Swayze: "He didn't win a poll on 98oldsmobiledotgov.blogspot.com and he didn't win against cancer.

Fun fact: One time in an Airport I saw Kurt Russel(or someone who looked like him) and I totally yelled out "HEY PATRICK SWAYZE YOU FUCKING RULED IN DIRTY DANCING""

"When I read about that the first thing I thought about was you verbally accosting him in an airport.

The most intelligent thing ever said about HissTank: "That site gives me the creeps."

The reply to EVERY JOE FAN WITH A QUERY ABOUT REAL LIFE MATTERS thread ever: "HAY! JOEBROS! GIVE ME ADVICE ON MY KID'S HEALTH! YOU LAME FUCKERS WITH BACKWARDS PRIORITIES OUGHT TO BE AUTHORITIES ON SUCH MATTERS!"

In response to a query of the legitimacy of Nacho as a cheese type: "No, but it IS a type of JRD208's favorite kind of food: processed."

REAL TALK: You harassed and lied to some low wage workers because you had to get a figure for $2 (which probably already owned one of anyway). Fuck you.

A possible use for HISS Tank: "The Tank has so many unemployed men, it should be in some sort of Barrack era study."


Some stupid fuck once asked me "John, why is STS still around?" This is the reason: 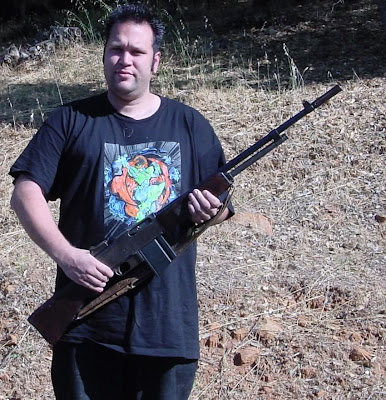 "You can just tell that Shin Gouki fuck is standing there thinking he's a soldier of liberty ready to hold off the Red Menace/the New World Order/Brown people." Last Best Angry Man