I'm not sorry! However to make up for it Here's some Smash The State Classics:

ILOVEBLACKRIPCORD.COM [January 4th, 2009, a poll on HISS Tank.com about Black Ripcord being Black]

GUYS THE G.I. JOE MOVIE IS ONLY A SCAM TO MAKE MONEY! THESE LIBERAL HOLLYWOOD BIG-WIGZ DON'T CARE ABOUT G.I. JOE. I ONLY TRUST LARRY HAMA THE ONLY GUY TO DO ANYTHING WITH G.I. JOE, HE DID EVERYTHING, SCULPT, PAINT, NAME, FINANCE, DRAW, AND PACKAGE EVERY G.I. JOE EVER!

I guess Snake Eyes is cast wrong, as he's from AMERICA LAND OF THE FREE HOME OF THE BRAVE. Not some Scottish guy

Says the guy with the revised Lifeline Avatar
Posted by Johnny Turk at 12:08 PM No comments:

Where's my vest? (The Return) 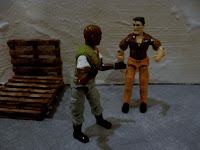 Will they ever find their Purple Foreign Friend? Check back sometime and we might have updated

Here at Smash The State we tend to poke a lot of fun at jerks who are currently posting nonsense such as TORSO JOINTS HAVE FINALLY PROPELLED GI JOE INTO THE 21ST CENTURY on Hisstank.com but we have a notice for all of you, the fan community has always been retarded. So today we look back at three old message board talking points that have been lost to the sands of time.

I remember back in like 2000-2001, right around the time the 2-packs came back there was some kind of crazy hate fest going on surrounding people who "Horde" figures. Meaning people who bought like 40 Cobra Arctic Packs so they could COBRA ARCTIC FORCE ARMY shots in their studio apartments or whatever. You needed 40 white night creepers to awkwardly surround 3 86 snow serpents and a Corps vehicle painted testors gloss white. So people on message boards got all ragin' about HORDERS TAKING EVERYTHING ON THE SHELVES. G.I Joe fans hate consumerism, despite collecting something mass produced by a major corporation. This talking point faded away sometime around the time the ARMY BUILDIN' crase of the mid 2000's began.


2. NO GOOD FIGURES AFTER 1986 OTHER THEN FALCON AND SHOCKWAVE

This one is probably an original G.I Jerk talking point, the once oft-deputed "fact" that no good figures were made after 1986 - meaning the year most generation Xers who now have the internet and bloated 90's bank accounts reached the age where "toys are gay". This was a serious business thing anyone who liked an action toy made in 1991 would be harassed about it, because NEON MAN THE 90S DEMOCRATS GOT ELECTED AND IT ALL WENT TO SHIT or something. As the wave of "Whoa I am 25 and I can do stuff now!" Generation Xers moved onto a more mature hobby such as golfing or being laid off after the dot com bust this faded into the background. You can still find jerks who will argue about toys made after 1989 or something but for the most part nobody really gives a shit.

3. WHEN WILL WE SEE MORE ARMY BUILDERS OR THE VIPER MOLD AGAIN

At one time people got fucking mad about the fact the only "Army builders" they could buy new were shit like a repainted Astro Viper, then 2003 happened and everyone shut the hell up about it. Once they sniffed a litte bit of fan entitlement Hasbro saw dollar signs and started cranking out the same 5 molds in all these different colors, this bellyaching turned into TWO MANY ARMY BUILDERS or RETIRE THE VIPER MOLD. When it finally looked like Hasbro was gonna shoot G.I Joe dead they released the viper mold one last time but this time with really fucked up legs, that was probably the apex of the early 2000's pining for the old days. Only this time around it wasn't the same. Hopefully some of these jerks learned their goddamned lessons.
Posted by Dr. Henry E. Miller at 8:46 PM 4 comments:

I'm sure we all know these but what the fuck!

FACT: They invented "EBAY AUCTIONS ARE THE ONLY NEWS SOURCE"

FACT: They once had a custom HISS Tank contest and some gay construction tank won

FACT: It has a member that committed a Murder/Suicide

FACT: They refused any mention of said Murder/Suicide

FACT: Dan Sartain has been banned at least 3 times

FACT: Being a fat woman makes you a good customizer

FACT: They once pissed off the Canadian Joe Jerks, which is admittedly easy and funny!

FACT: The old Smash The State got all it's traffic from there.

FACT: xFlintx is their only cool moderator

FACT: TheLongestDay is a tool, he once made a post about wearing his (probably fat) girlfriend's make-up and I made that a "Stupid Shit Said This Week" and he found it and posted about it and bad things happened. See FACT #1

FACT: TheLongestDay is also a moderator, he is a jerk

FACT: HISSTank's news funnily did make every other site obsolete

The first G.I. Jerk of yesteryear is "Maderic". He was the craziest motherfucker in the G.I. Joe universe I've ever had the displeasure of crossing paths with. This guy was was not the typical right wing G.I. Joe fan, he was to the right of David Duke, and I figure disliked the FBI for what went down at Ruby Ridge. Outside of his usual rants against "THOSE RICH DEMOCRATS" "TEACHERS UNIONS" and "HOMOSEXUALS MAN, HOMOS" was his distrust and dislike of Black People. Remember the 2004 Cobra Infantry 6 pack? Well there was a black guy in there, old Maderic wasn't too happy about that, I guess Cobra was supposed to be the good guys in his world!

His biggest claim to lame, was this really crazy ass epic dio story "The SERPENT WARS" which he pimped for I swear to god 2 and a half years. It was supposed to be this epic with amazing effects an "awesome" story of the G.I. Joe's being hard ass soldiers kickin' ass and taking names, Cobra being in a heated power struggle, Serpentor doing shit, as well love! Well thing is it never came. He had spent most of 2002 on message boards asking for people to sell him Vipers and Cobra Soldiers for like $4.00 a piece. That's mad cheap

Also by "Awesome Story" I mean it would read like this: Chapter 1 Rocky Mountains-Colorado
The frigid temperatures and the wind added to the horrible conditions in the top of the mountains. The snow-suited man walked solemnly down the winding path to the lab complex.

“Hey, Snowstorm. Where the hell is the transport off this rock?” Another man shouted.

Snowstorm turned to see who yelled, it was Flint, otherwise known as John Ramirez. His sleek black hair, and beret were unmistakable.

“Beats me, John. My GPS has no signal on it from this high,” Snowstorm said softly.

“Here it is,” Snowstorm said softly, as he held out a small transponder locator reader.

“The transponder says its close,” Ramirez said with a smile.

“I thought you liked the cold?” Flint replied.

“Very funny,” he said raising his eyesight from his comrade to a noise coming from the hills behind them. “What do you think that noise is?”

“No seriously, it sounds like heavy machines,” he said. As he tried to adjust his vision of the surrounding area, he saw it coming from behind the overpass but couldn’t recognize what is was. He pulled a pair of binoculars from his shirt pocket, and looked in shock, to read the labels marking the approaching vehicles simply in one phrase, he released from his icy lips, "Cobra...."

Maderic once made a custom, it was of some dumbass boat, it was made entirely out of cardboard. He posted it on Joecustoms (More on that in a minute!) where it appeared to be a foot long, and a foot tall and 8 inches wide. It was taken on a doc and there was some white trash kid sitting next to it with a Mighty Ducks shirt on, I wish I had that image saved!

So at one point Maderic was a member of Joecustoms.com, there was some thread where dudes posted lists of shit they hated, most of which was "Activist Judges" "Judgemental Women" "The city of San Francisco" and "Roe Vs. Wade" he posted something, and I can't remember what was on it, but it was way bad. So he got into an argument which concluded with an e-mail to known jerk "Beav" asking him why he was so gay and something about wanting to fight. He got banned and then drifted along message boards posting crazier shit.

Sadly in 2004 his dio was shown. It was 5 images of 2002 green vipers, but it was overly flashed and not in focus. Even sadder in 2003 his cardboard battle boat sank, it is unknown if the kid in the mighty ducks baseball jersey was on board.

Maderic if you read this, go jump in an empty swimmin' pool


APPENDIX BY DR. HENRY E. MILLER: "Also like 3-4 months after Maderic got banned from Joecustoms he posted a thread on the Devils Due Forum trying to milk sympathy for getting some girl knocked up. I always figured the girl was either really fat or a really methed up looking trashy blonde woman who had homemade daisy dukes and used the plastic tie thing from a garbage bag as a belt. In like 2002 in the old "Things I hate" thread in the "Flaming" board on Joecustoms (Back when Beav had a set of balls) he used to get into it with a poster named Divine Shockwave, who as far as I can remember was an ultra-liberal asian obsessed 17 year old who was way into white guilt. So the two clashed pretty often, it was fantastic. Unproven smug teenager who has never worked a day in his life vs crazy paranoid right winger who probably lives in the goddamned backwoods and has a crudely made plywood human figure in the backyard with "NIGGERS" spraypainted on it. After he was banned from Joecustoms Maderic would post dialog from his "Dio story" in his sig on Devils Due and one day it was something like "LAW: WHERES SHOCKWAVE FLINT: THEY FOUND OUT HE WAS A COMMUNIST AND HE WAS KICKED OFF THE TEAM". I figure Maderic is waiting up in the backwoods somewhere waiting for the racewar to start and has a shirt that says "O.B.A.M.A: ONE BIG ASS MISTAKE, AMERICA"

So yeah go fall in the empty swimming pool jerkface"
Posted by Johnny Turk at 7:44 PM No comments: