Playing dress up (Guns with orange caps, and the overweight) 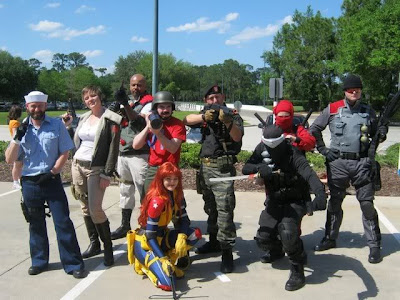 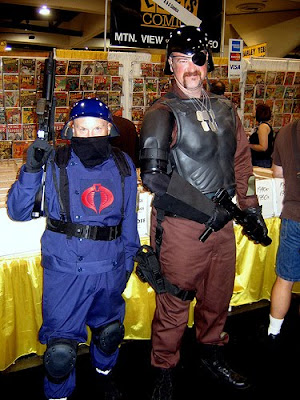 A child from make a wish foundation gets to go to Disney ok? What does this child see? His or her Heroes.. Mickey, Minnie, Goofy , Donald and the gang right? They might not have a tomorrow as I had stated in a previous post.

Now... A form of this happened with us as I also stated... had a boy in a wheelchair from this foundation roll up and we were asked if we could have a photo taken.. the boy's fav character had been Flint... It isn't about the cosplaying RPG ... It is about making fans like the both of you to take home a lasting memory.. When that boy see's a Flint character He can say'' Hey! I know that guy! I shook his hand! He told me He'd always fight for my freedom, where ever there's trouble!" Just a simple hand shake... means a world of difference to someone who might not have much of a tomorrow to look forward to.

Now for !!SE!!.. what he did for the kids and other fans alike was into seriously interacting with them.. LLC did this as well. A boy went to pose with SnakeLLC and the look on his face was worth more then the price of a full attendee package. Words cannot express what that boy felt holding one of Snake's Katana's and posing with him to defend against a possible onslaught of Cobra troopers! YOU say your imagination works differently? so do those fans who got a chance to meet their favorite Joes. That boy went home with a memory of.. I met Snake eyes!

That is why we do what we do. Without characters to physically talk to and have fun with... what good is it? Hasbro backed our ideas and many of them were estatic that we were there to represent Jinx, Snake-Eyes, Storm Shadow, Lowlight, Zarana and Covergirl.. We did it for the backbone of the convention."


That's the rantings of the deranged minds of some creep who dresses up like a goddamned toy. Dressing up in lobbies of 2 star hotel convention centres isn't it.

I don't know what the fuck this is. Underneath a horrible Rap-Metal song with such poignant lyrics as "DON'T THINK ABOUT IT, ACT UPON IT", is what appears to be some assholes dressed up as army guys and running around some Central American torture hole stopping TERRORISTS from their underage girl kidnapping ring. Or something. Also Duke is some William Hopper looking prick who sure hates trees. 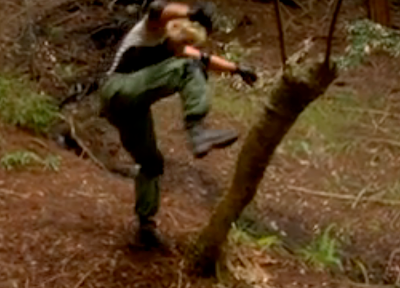 I just wanna know how someone convinced there Dad to play a character. Roadblock is from Ghana, apparently, and is pretty terrible at rhyming since he rhymed "Ass" with "Ass".


I understand, that G.I. Joe fans are generally less interested in anything that isn't "Just like the good old days!" or "Action packed thrill rides" but christ isn't there something less obnoxious to do? Like Grunt getting PTSD and getting kicked out of the army and driving through that ghetto known as "Ohio" or some shit.
Posted by Johnny Turk at 8:28 PM 2 comments:

Labels: 104st donut brigade, Horrible people, Pursuit of Cobra Rock N Roll would be a cool figure, Soon content will just be in podkkkast format, There's a rainbow and all the colors are black


We here at Smash The State have wasted A LOT of time explaining how G.I. Joe fans are generally awful people, ya know misogynistic creeps, fat dudes, fundamentalist Christians, and dudes who listen to heavy metal. The greatest way to find this out is to take a visit to the 'Stank, there's all sorts of fuck ups there! From Jr0d to Unclassified (The dude who threatened to beat up Last Best Angry Man at a G.I. Joe convention in the previous post) and a guy who's just as fucked up as those two clowns!

Weezus is a guy who has a stupid haircut and used to brag on HISS Tank about how he always got into fights and was super tough. Usually when someone brags about how much they fight, and they're on the internet, it's obvious that they're lying! However Weezus also posted pictures of him looking like the victim of a good ol' fashion fag drag! Turns out he was a backyard wrestler. 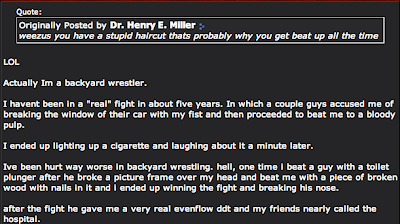 A real ass appearance by the Doctor


Well, today I saw our dear friend Weezus was asking about the legality of a t-shirt. Well this is the t-shirt: 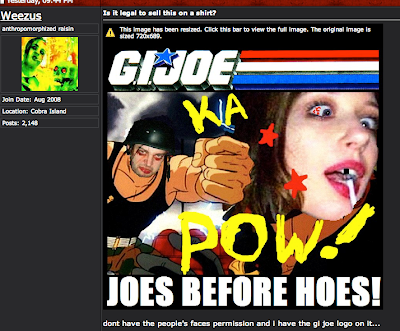 Labels: A collection of Real McCoy picture discs, Dudes who make 6 grand a year, ron pauls real first name is google what is he hiding from us

Yeah, just like last year we fucked up and got the date wrong! Also Dr. Henry E. Miller was too busy puffin' mad chron and impersonating MF Doom. I was too busy ghostwriting episodes of "Anderson Cooper 360º" and building a fence. Also, fuck you, if you're all "Jesus Johnny Turk, didn't you just post about an anniversary of this awful place" probably, but still fuck you, it works for the G.I. Joe line.

Anyways, as always being awesome fucking dudes here's a great thing from a long long time ago: 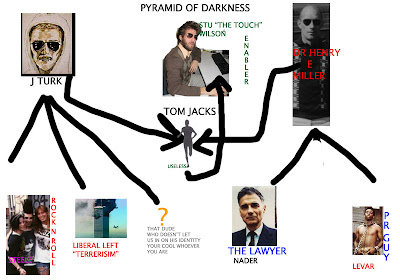 From July 2008's era of fictitious lawsuits and when we thought it was hilarious to claim Levar Burton was our PR man. Also prior to us having readers


Something written by Doctor Henry E. Miller that is more topical than ever!

The Doctors Short Takes Part Duex
Don't you idiots get it that by getting your panties in a bunch over the RARE AND EXCLUSIVE FIGURRRRUZ! that we ONLY HAVE ONE CHANCE TO GETTTT! you are creating your own fucking problem and building a market for the scalpers you detest so much?


Anyways as always STS would like to thank the following people, places and things for not being total post-hetero landscapes

Labels: Dwindling creativity, IT'S A SERIOUS HOBBY I SPEND LOT'S OF MONEY ON IT, nerds losing money, Nothing will top being called "Hate Bloggers", Rack Focus, The Zodiac, This Will Be Our Year
Newer Posts Older Posts Home
Subscribe to: Posts (Atom)