Let's start off with the personal favorite of all 0 readers, personal attacks!

Yeah she's big alright: "Might have to add this to the list of places I need to take Amanda. She's a big TNG fan and likes places like this that have ties to the series and films. We keep talking about heading over to the Huntington Gardens where Starfleet Academy was shot (in TNG). Not sure this would be enough to coax her back to Arizona but it might be a fun trip."

Might be a stupid question when you realize it's not intended for children: "Might be a silly question, but with its rich universe, I always wondered why there never was a James Bond action figure line".

If you had to make a post that made no sense, you succeeded: "If you had to adopt a witty and/or cool new G.I. Joe (good or bad character)
codename (that hasn't been featured in the toy line, animated series or
the comic), what name would you call yourself and please say why."

BLACK RIPCORD, that nubian god totally nailed that redheaded bitch, sry sn8ke I'z: "Some figures just scream sexy, which one is your favorite? Does that chrome dome on Destro turn you on? I have to say it's Outback, my god, look at him! The 90s treated him well."

I'm sure all those 12 year olds who think that real life is all "DARK FUCKIN' RAINY ALLEYS" and "LOTS O KILLING" who don't collect G.I. Joe'll love it: "I'm currently working on a more "gritty" Joe-Verse. I'm kinda doing this for fun, but I want some opinions on it. Nothing is what it seems to be in this setting. Some things will come back, but they want be the same."

FUCK THOSE GUYS IN OTHER COUNTRIES! WHAT'S WITH ALL THESE GUYS IN JAPAN SPEAKING JAPANESE!: "I know that there's a lot of gripe about ROC being international now instead of American (and in my opinion, deservedly so)"

Wow, this is the most awkward post I've read on a Joe board in a longtime. Expect a news report about "FAT MAN IN COBRA/DECEPTICON T-SHIRT FOUND ON 3 MEATHOOKS": "Hey guys, just curious if any of you are in or around Savannah, GA.
I'm not necessarily looking for someone to hang out with or anything, just to share my findings with..
I find a lot of cool toys around here that I can't afford to buy but I don't know any other collectors to pass the info on to.
(found the walmart playsets last night and wave 5 SS) Anyway, just curious.."

Mike T talking points still exist!: "I've read that it's a misnomer, like the 7th was released a different year...or something. I can't recall off the top of my head who or where I read it, so consider this a bump. I think it caught on because it rhymes kind of. It's certainly a fun description."

Needless? The less psychopathic honky's on the joe team the better you fucking putz!: "Good news for those of you out there who were upset at Repeater’s needless race change. As it turns out, it’s a very easy fix to make him true-to-form, and give us a simple but effective LBC Hardball as a bonus"

I come from Canada so I don't know what "Urban Outfitters" is, but if Joe fans shop there it's probably a bad place: "was in an Urban Outfitters today, and they had some very cool retro Cobra shirts on sale. It was a faded blue logo on a faded red shirt. The sale tag on the shirt was $10, but they were on a rack that said $5, so it seemed to be either a good deal or a great one."

That's all, thanks for staying dumb Joe Fans!
Posted by Johnny Turk at 2:11 PM 1 comment: 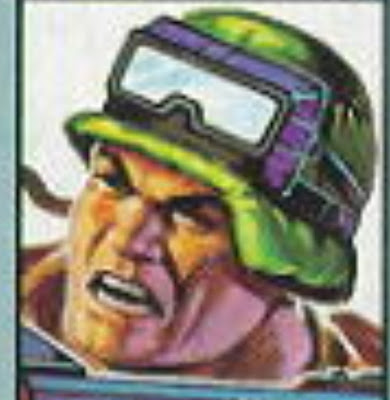