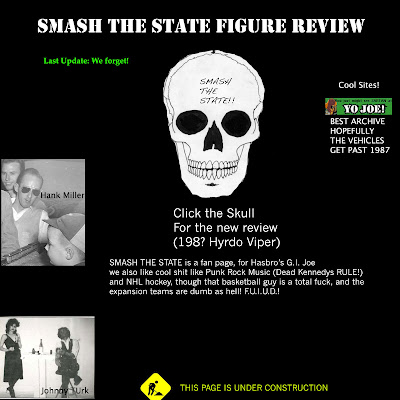 This is the only known screengrab of the ORIGINAL STS website circa 1998, after abandoning a print zine because "That fucking kraut at the print shop in Bay Port can't take a fucking joke" and the desire to "Step into the fucking grid, man, it's 1998" Smash The State had a website cooler then the original General Hawk site.

On June 12th 1994 We lock a remarkable Soul.......Voice actor Chris Latta (best known for his voicework as Cobra Commander on SUNBOW'S G.I.JOE).

Every year my club holds a moment of silence in honour and memory of MR. LATTA.

And we'd like for you to join us, and honour his memory.

Labels: Murder In Hollywood, Salad Days (Are Here Again), Simon and Garfunkel, You talk 'bout suicide but you always run and you always hide, you're just a bummed out guy
Newer Posts Older Posts Home
Subscribe to: Posts (Atom)