Smash The State has not been terribly active this summer due to the following:

so while we we're doing all kinds of cool shit this summer, thousands of dumb nerds went to San Diego with the hope of paying inflated ass prices for some dumb "exclusive" toy that at the time of this writing Dr. Henry E. Miller doesn't even know what they look like

But wait, lets back peddle a hair here, while thousands of sweaty nerds flew to goddamned California, another bunch sat on their computers and tried to buy these exclusives on Hasbro Toy Shop. Apparently a bunch of them tried to buy shit at once and HTS broke or something and nerds couldn't buy con exclusive copping heroin zartan or whatever, and of course it led to OUTRAGES like this:

Hasbro must read this.
Please allow me to be candid..

I was there at 11:30 and put a Starscream in my basket several times.... Everytime it crashed. I reloaded, restarted the transaction... everything.

Once Starscream was gone.. I went after pink Zarana. Didn't even try for the cold slither version. Everytime i tryed to pay.... IT CRASHED.

This was completely fucking awful. I have NEVER had such an awful experience trying to buy anything in my ENTIRE life.

I have been one of the biggest proponents and supporters of Hasbro through the years. But this.... just disgusting.

Here is what i don't get.. There was a time where there was an amazing brand under Hasbro called GI Joe. We grew up with it. We have supported it for 30 fucking years. The Hasbro team almost completely fucking killed it with that piece of shit Rise of Cobra movie, and we ... US... THE FUCKING COLLECTORS, are the only ones keeping their brand alive and those team members employed.... and they FUCKED us.

I was fully prepared to give roughly $100 for your product.. and you said, No.

Doesn't it seem against your better interests to make it so incredibly difficult to buy your product when it's falling on the brink?

Hasbro, you bit the hand that feeds you.

For the record nerdo, you haven't supported the line for 30 years, your parents most likely bought your goddamned toys when you were a kid, unless your like 60 years old like Thomas Wheeler.

While thousands (actually probably a hundred or so) got all angry at an overloaded online cart system, back at the Real Ass Comic Con this happened:

Check it out, 15 minutes of live ass video featuring a 70 year old woman (???) ranting about how Hasbro DROPPED THE BALL and screwed her out of toys or something.

Apparently a guard "touched" people and told them to leave while some other dude yelled about throwing down 75 bones for "preview" night and that he has WAITED 3 HOURS, then a "Hasbro sucks" chant starts and everyone in the crowd looks like the fucking losers that they are. They make it sound like they are actually waiting in line for something cool like a copy of Thin Lizzy - Jailbreak or toys that aren't some dumb variant.

Oh and they set up a Diorama with the Flagg and people got all sweaty about that because HASBRO WONT TAKE THE RISK ON A NEW ONE or something. GI Joe is going to die in 2012. Whoop there it is

Man The Fuck Up!

Dear America, please raise your debt ceiling so that you don't default on your loans, and become an even bigger problem for the rest of the world. 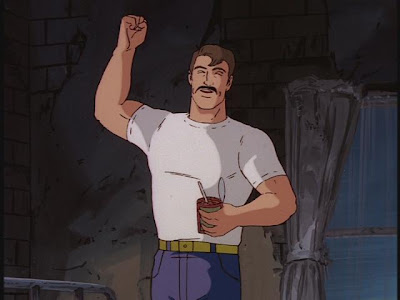