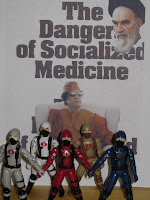 Cobra supports socialized medicine. What the fuck is this commie pinko shit?

This is inspired by our dear friend and #1 fan (in this case #1 means my favorite!) and his recent bout with tuberculosis, FIREFLYED you r NEVAR ALONE
Posted by Johnny Turk at 2:09 PM 2 comments:

A Brief Trip Through My Adolescence

It was a Saturday afternoon, I was nine years old and it was a different world then it is now. Our parents thought nothing of booting us out of the house with a packpack of action figures and telling us to go to the playground till the street lights come on. We didn't really have video games yet, and watching some weird old 70's cop movie on TV didn't become a popular practice for a few more years (we discovered pot) so off I went to the park to meet up with the rest of the neighborhood kids to play with toys and sing rhymes about how girls smell bad.

I met up with my usual bunch of jerks, Jimmy Figs, Ian, Juan and this weird kid who was hanging around with Ian named Bobby R. Watts. I had known Bobby from school, he was a trouble maker and his legal name on his birth certificate was Bobby Robert Watts, so you could either call him Bobby Robert Watts, Robert Bobby Watts, Bobby Bobby Watts or Robert Robert Watts. He was a fucking spacecase, even back then.

When we got to the park we picked sides on who was gonna be who, I got to be Cobra that was pretty rad I liked being the bad guys because I would always kidnap one of the other kids Joe figures and not give them back till "You gave me 25 cents or did the chump shuffle". I took out all the figures I had brought: Cobra Solider, Cobra Commander, Destro and Breaker. Ian griefed me into giving him and Bobby "Bob Seger radio guy" (Breaker) because they were the good guys and would be out numbered if they didn't have Bob Seger Radio guy. I told Ian not to give his weird friend my toys but I also knew I had to be nice to Ian because he had a really cool BMX bike I might get to ride and he had a pool so playground politics took over and I let them use Bob Seger Radio Guy.

The battle went as expected, me and Jimmy Figs rushed there base head on and flipped over the Vamp, Juan tripped over a stick and scrapped his knee and ran back home, and in the heat of a firefight, Bobby R. Watts picked up Breaker and made a single man rush at the Cobra front lines. Only he grabbed him too hard and broke his arm right below the straight arm joint.

I turned to Jimmy Figs, Jimmy was my muscle in these situations but Jimmy didn't want a confrontation because he was too busy with a juice box or something so I went up to Bobby and asked him "Dude what the hell". All he did was laugh and start singing A Mamas And The Papas song to me. So I grabbed my broken toy and walked back to the big dirt mound. It was time for action.

I found the biggest, most rock filled dirt clod I could find and held it behind my back. I yelled out "HEY BOBBY, CHECK THIS OUT, THERES LIKE, A DEAD RABBIT OVER HERE!". Bobby was never one to skip seeing a dead animal and he took off towards me like a goddamned rocket. So I held up the dirt clod, cocked my arm back like fucking Tom Seaver and let that fucker go right at his big ass head. It beaned him right in the eye and he dropped like the 100 pounds of jerk he was. I yelled out "YEAH THATS RIGHT DON'T BREAK MY TOYS!" and grabbed Jimmy Figs by the arm and dumped my toys into my backpack and hopped on my bike and headed back to my house.

The next time I saw Ian he said Bobby R. Watts went around the playground yelling really mean curse words like "SHITJERK" and "ASSCLOUD" at people and then took a shit ontop of the slide. I got to ride Ians BMX bike later that Spring and even went in his pool a few times. I didn't see Bobby R. Watts again till middle school, where he once got suspended for yelling "SATAN IS EVERYWHERE" into the school PA.

A few years back when I was selling my collection, I found Bob Seger Radio guy in a junk bin with his broken arm, I thought of that afternoon and how dirt clod justice was dolled out. Then I plopped a not broken arm onto straight arm breaker from another Junk box and then sold him for like 20 bucks. Aces.

Labels: crackerjack timing, dirt clods, jimmy figs and i got drunk the other night

Dr. Henry E. Miller has been on about this since like 2005, he was all "Hey Turk, in the 80's I had a Steeler with a Doc Head. His codename was "Stealer" because he was black and black people steal"


This is finally a dream come true
Posted by Johnny Turk at 10:17 PM 1 comment:

You know who's surprisingly popular despite looking like a homosexual, has a lot of easily lost parts and was more science fiction than Serpentor (and Serpentor was made up of the DNA of History's greatest monsters and a pro wrestler). Zartan

Zartan turns blue for some reason, I do not know what the reasoning was other than it was fucking goofy. One time in 2009 I was in a grocery store and I was walking down some aisle looking for toothpicks, which are always somewhere really fucking inconvenient, but I saw this dude who's skin was like navy fucking blue. He had like white hair and dark blue skin, and judging by his facial features he was a white dude. Anyways I guess that proves Zartan's super power isn't too far fetched.

Now the blue skin part is annoying, it means you need a boxcutter to open the fucking jerk, which is an awful lot of work to change an O-ring, but it's not even the worst thing about the fucking guy, I guess because he's an Extreme Paranoid he doesn't wear a shirt but rather he puts on a belly shirt with saran wrap over the nipples and it falls off all the fucking time. He also has those on his thighs, hey Zartan, fuck you!

Also he had a goddamn thing on his head that might've been a rag or a hair. You could take it out and replace it with Buzzer's hair, Spirit's hair, Baroness' hair or Raptor's bird thing. You couldn't however replace it with 1993 Zartan's mohawk. The world mourns the lack of squeegee kid Zartan customs.

He also had a Swamp Skier. It looks like a hunk a junk. So rather than fire some dummy in design they just said "these small vehicles fall apart all the time, look at the Silver Mirage! just make some box to throw busted thing into!" So you could put your swamp skier into a box and then put Zartan's backpack face on him and be all "Look at that old feeb with the box a junk, if this was 'Nam we could kill him and score some smack"

Here are some photos the only friend of Smash The State was commissioned to do: 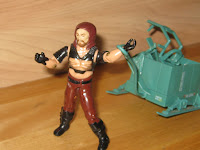 LEAVE ME ALONE I AM AN OLD MAN 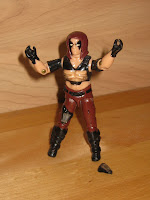 Posted by Johnny Turk at 9:27 PM No comments: