Look, I know Smash The State (Est 1956) came online at the beginning of July 2007, well fuck I don't care enough to write these things when they're current. Smash the State is the #1 blog to ever exist in the G.I. Joe realm (Sorry Cobra Cabana, LBAM Toy Review and Broca Blutch), only because we never lose! Trust me, even Dr. Henry E. Miller isn't banned from HissTank anymore, and Hasbro didn't sue us for the fake Q&A we did even though a guy on HISS Tank said we would!


Jerks whom I feel are responsible for our success:
Stuart Wilson: You're #1 in the charts, and #1 in our hearts, Stu. Please come back!

Broca Blutch: You might be creeps who stole all my ideas, but you also provided us some goddamn traffic. You guys are the Marlon Brando to our Joe Pesci. Overrated and probably Italians (and you didn't say "fuck" that much)

Felonious Monk: Hey, you're an angry guy, and started the best G.I. Joe message board thread ever, because of this, and your penchant for flying off the handle and leaving for three goddamn months I think you are an awesome dude (and I'm glad you got that Wolverine)

Bravo: Without you to rip-off, there would be no Smash The State

Dan Sartain: You are our only famous fan, because of this I think you are better than everyone else. We need to podcast soon, as it'll be funny, and maybe Dr. Henry E. Miller will buy a goddamn microphone

Felix De Cobra: You once gave me a picture of Dial Tone eating beans hobo style. Also you live in the city the Goonies was filmed, and you've got the longest running G.I. Joe message board ever. P.S. I stole your custom idea!

Last Best Angry Man: You don't seem that angry. Also that rant on your Resolute review was the best

Fireflyed: You never lose, and post pictures of people you dislike on the internet. Thanks for Chill. Don't Kill, too!

Now that thanking people I honestly don't believe contributed anything of any merit to me is done, have some old ass content. This blog is a repaint version:

The Doctors Short Takes; Part 2 (April 23, 2008)
From The Desk Of The Esteemed Doctor Henry Edward Miller:

I shouldn't be surprised, being a fanbase full of republicans and crucifucks who don't like to hear anything but their own spiel joe fans sure like to gang up on people who don't agree with the mob mentality. On a Popular Joe Message board, a respected member of the Joe Community was recently slammed by angry nerds for posting something that shook their little world like Micheal J Fox on his website. He didn't like the newest release of a repaint with psychical flaws (as mentioned in a previous post) included with a vehicle thats been thrown out like 5 times in the last six years. I guess you all have to like all the new figures or at least give an A FOR EFFORT on your website to really be a TOTALLY KOOL GUY.

There was people who ganged up on people they didn't agree with, and their name were "Nazis"

An excerpt of "Stories Jerks Sent Us" (March 18, 2008)
"???" by Tommy WHEELIN DEALIN
STEVEN:
WELL I THINK IT WAS COOL.
Dukel:
I DON'T THINK IT WAS, BUT IT HAD TO BE. CAN WE TALK ABOUT ANY THING ELSE?... PLEASE.
SNAKE EYES:
WE LIVE IN A TOUGH PLACE TO LIVE AND YOU WALK AROUND LIKE EVERY THING IS OK.
Gabriel:
WELL I AM NOT AFRAID OF THE GANGS.
ROADBLOCK:
WHAT DO YOU FEAR? (GABRIEL LOOKS RIGHT AT STEVEN AND SAYS IN A COME SEROUS VOICE.)
DUKE:
ONLY ONE THING.. DEMONS.
SNAKE EYES:
WHAT DO YOU MEAN ? (GABRIEL STILL IN HIS SEROUS TONE.)
DUKE:
WELL.. I AM HEAR TO KILL THEM. LETS JUST SAY EVIL IS EVOLVING, SO GOOD HAS TO AS WELL. (THERE ARE SOUNDS OF GUN SHOTS AND A WOMENS VOICE SCREAMING.
OV SCARLETT:
I DON'T HAVE YOUR MONEY. PLEASE GIVE ME ONE MORE DAY.
OV PIMP DESTRO:
FUCK YOU BITCH. YOUR A DEAD HOOKER. (HAND GUN FIRE 2 SHOTS) STEVEN REALIZES IT IS HIS MOTHER IN THE HALLWAY. HE GETS UP AND RUNS WHILE SAYING

In the late 80's after ruining his career as a mercenary, Major Bludd decided "SHIT MATE BEST GO BACK TO THE SONNET BUSINESS AYE" I am the proud owner of the only surviving copy here it is


Now that that is done, here is a list of tags used here on Smash The State:
Rick Danko is the best
Tom Jacks Is On Thin Ice
Rick Danko Knows Things
Wolf Shirts
Malicious hair dryers
This is it
RED LOGO STATIC ATTACK
Convention Exclusives cause domestic abuse
Corpus Christi
General Hawk Writes Propaganda Songs
BLITZ YA WHOLE TEAM YA NIGGAS NEED TO COME CLEAN
Guys they really do care
Thomas Wheeler failed his road test 19 times
They try really hard to make toys we the collector enjoy
Rock n roll once beat up some new wave band for not covering a ccr song
Jello Biafra
Robbie Robertson
Danzig
Tom Jacks Reform
The Elderly
MUTHAAAA I'M A BUILDING A PATIO I HAVE A SKID A BRIIIICKS
Outsourced action figures
Oh God The Weather Is Bad
Running On Empty
Nerds With Healthcare
Live Rust
BIG BAD TOY FRAUD
Organized Religion
MALE INNZ
Spook City USA
2+2
TOYS IN LOVE
shout out to all my homies on hisstank.com
Ch-Ch-Ch-Ch-Cherry bomb
Sorry Levar we have to let you go
Rick Danko got a lot of screen time
You're Living All Over Me is the best Dinosaur jr. Album
Smash The State Never Loses
Nerds Getting Angry
Jpeg compression
Tom Waits
Slam and Worm
Why haven’t you made effects yet
REMEMBER WHEN THE JOE COMMUNITY WAS LIKE 6 SITES
Nerds With Bad Websites
Rick Danko is great
STUDIO SESSION
Mike Fountain is no friend of mine
Jerks spending stimulus checks on dumb shit
guys who know things
Gangland Killings
The Band
CCR
We're Firing Tom Jacks
A Season In Hell
Richard Manuel has great eyebrows
I WILL CONTACT THE SHOPPING CENTER SECURITY FORCE
I hope Thomas wheeler gets drafted
Zero Hour
SEX BOMB BABY
The Dicks hate the police
Heroes
Nerds upset by the internet
Keith Morris
Keith Moon
Tina Weymouth
Nerds Losing Money
BOMB SQUAD
Dirtbikes
Levon Helm
Wait the guys from aerosmith are still alive?
Rain is hot I KNOW
The History of America
Ronaldo Reagano
Guys with beards
REALISTIC MILITARY ACTION
Geddy Lee
DON'T YOU DARE BEND THAT CARD
It Makes No Difference
SHUT THE FUCK UP DONNY
Walter Mondale
Eric Bloom
HAYSTACKS CALHOON
I Am The Owl
Joe Fans Are cheap
I hope these guys try to sue us
ON EBAY
YOU CAN BRING ON
Margaret Thatcher
Chuck Biscuits
Sun is cold
Sanford and Sun
Legal Threats
DAN SARTAIN
Dan Sartain
If you post something stupid on the web. I will find it
Bootlegs
Lovin’ Spoonful
GUYS THERES GONNA BE A TERRORDROME REISSUE FOR 15 BUCKS
Satanic Cults
BOSTON WINS
I Made it out of the hood
Mobile Electric Chair
Scooters
Squash Head Harry
Zartan's Swamp Skier
Ken Nordine
Lifting Vending Machines


That's all folks, please remember the following: Smash The State NEVER LOSES, and "at the time I was doin weight lifting and the machime was light too me."
Posted by Johnny Turk at 11:16 AM 2 comments:

Labels: EvilFace's 4th Circle Of Hell, I love you all, I never did get that t-shirt with the Max Rebo band, It Makes No Difference, Photography, Scooters

If you are a member of Joedios, and your photo was on this blog, you must personally ask myself, or the esteemed Dr. Henry E. Miller for it to be removed. The lesson here is "Don't put your goofy ass mug on the goddamn internet"

Fireflyed has no editorial control over this blog, he is a contributor who is paid with a jar of home made jam every 6 to 8 weeks, myself and Dr. Henry E. Miller have control of all things, and require the following:

1. A personal request for the removal of said image. If more than one is on a message, please note you will have to request each one be removed individually.

2. A decent explanation as to why we here at Smash The State Figure Review (Est. 1993) should remove the images. Again, a separate explanation for each image

3. An Apology to the following people: Johnny Turk, Dr. Henry E. Miller, Tom Jacks Esq., Levar Burton, Ralph Nader and D. Boon. All you have to do is apologize in your message, list off said names, and tell us why your sorry. Inconvenience is the best reason you can give, however we are open to interpretation

4. A chronological list of D.O.A. Drummers. It must be accurate.

Please note, myself and Dr. Henry E. Miller are not affiliated with any websites but Smash The State. We only know Ronald the Thomas Gunner and Fireflyed through the fine folks at Broca Blutch. If you look at one message posted by Fireflyed he uses my last name in place of "Roland" that is a typo.


® "Just Fuck Off And Die" is the intellectual property of NoMeansNo and the Wright brothers. Thanks a lot bro!
Posted by Johnny Turk at 2:31 PM No comments:

Labels: 2+2, Dan Sartain, Dan Sartain when are we doing that fucking podcast?, IT WAS ALL LIES, Peace Corps, Serious Business

This strange little hobby of ours is basically filled with two types of people: phony pompous assholes and creepy creepy jobless fat dudes. And as a result of this fact, STS is ready to pour out the proper accolades upon these wretched individuals. With that in mind I give you:

There is no particular criteria for this esteemed award and with the abundance of freaks out there, there will be no shortage of nominees.....
This Weeks Winner?!
Shane Welin 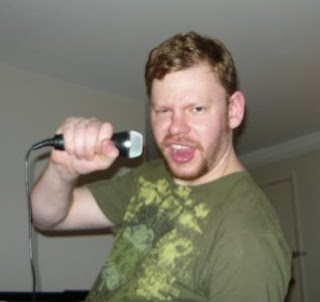 Shane goes by the handle LordRaven on joedios.com. He is also the life partner of the recently resigned moderator of joedios.

Would you like to know more about Shane? Of course you would.....

"Well I live in Winnipeg, MB where I am the assistant manager at a clothing store. Been there almost 2 years now.I collect lots of different types of action figures, mostly joes and starwars, but anything I think is neat I'll pick up.
I play video games, board games, and RPGs like D&D.
I am a published poet, author, and musician."
......and a delusional alcoholic. 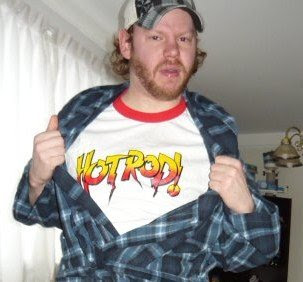 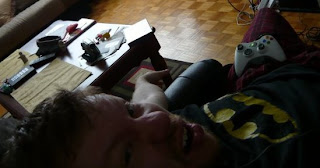 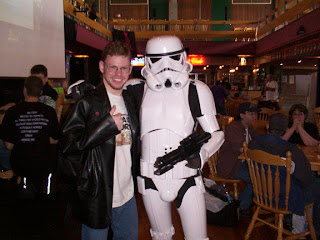 Do musicians even get published?
If your so damn accomplished, why do you look like your head cashier at some dick grocery store? 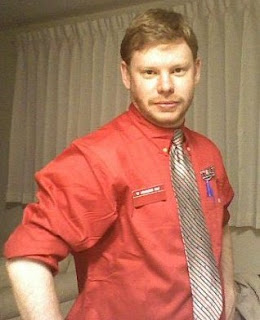 When Shane is not too busy meeting other gay dudes online or telling Graham how awesome he is, he stops by joedios to say weird shit aimed at me that makes no sense. Like, "He without out sin, cast the first stone." Ya, keep trying to quote the bible on a toy site you ginger-headed drunk.

Well there is your Douchebag of the week!

Oh yea, he makes his own comedic shorts too!
Shane's Comedy- The Distraction

Labels: Douchebag of the week-a-thon, Ginger Drunk Canadian, I don't think your published in anything creepy McCreeperson, If you post something stupid on the web I will find it
Newer Posts Older Posts Home
Subscribe to: Posts (Atom)