G.I. Joe is one of those properties where everyone gets so goddamned wrapped up in their own stupid idea as to what G.I. Joe is that they disregard absolutely everything else. Cartoon fans won't acknowledge the comic and vice versa, fuck there's even that one dude who posts the same message on every board (except Smash The State: stsforumreview.proboards.com) about how the continuation of the marvel run (16 years after people stopped caring) is bad because the DD comic will be disregarded. Then there's resolute fanboys who are all "Yo man, that was good I mean there was no characterization, it was rushed as fuck and in the end was terrible so I'm not buying the toys but that's totally what G.I. Joe is man!".

Basically those people are all freaks, and I'm unsure where people who are fans of the Action Force comic fit in. Action Force was a weekly comic that was black and white and featured a lot of different things compared to the boring ass G.I. Joe comic. Totally rad stuff like killing and racism.

The good thing about Action Force (other than lots of death and Major Bludd calling Storm Shadow "Jappo") was the fact that characters got a lot of characterization, I mean what the fuck did Torpedo do in Marvel? Nothing! In Action Force there's a story about him going on leave (to the windmill his Dutch ass lives in) and Cobra Commander figures this out and sends Copperhead to kill him. Fuck you Larry Hama! I mean doing a small story about some jerk to sell toys is a lot better than Marvel's "Hell yeah let's introduce Storm Shadow and then in less than a year expose him as being a good guy takin' Cobra down from the inside to find his uncle's killer)

By the way did Storm Shadow ever fucking do anything about that? I mean I remember them being all "Yeah, Zartan did it!" but Storm Shadow never stuck him like a pig, and then Zartan was hanging out teenage kids and became a pseudo good guy. Man why did every fucking Cobra change their ways except like Major Bludd who was all "Aye mate I'm writing an album don't use me between 1987 and 1991" and like Road Pig??? 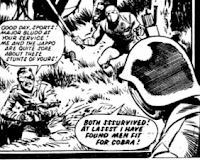 In the end all I have to say is Action Force comix are a fun way to steal characterizations for unpopular characters and to read stories containing G.I. Joes that aren't hella lame (Grand Slam, Snake Eyes, 1985+ G.I. joes are nowhere to be found!)
Posted by Johnny Turk at 1:13 PM 2 comments:

Recently, Smash The State got a chance to have a special Q&A session with a hasbro rep, there are rumors that this Q&A was a result of a lawsuit settlement and a transaction involving the stolen masters to Electric Ladyland we at STS cannot comment on any of that because we are too busy counting money.

Lets get to the questions:


1. I have a big interest in urban things, when it was announced that GI Joe paratrooper Ripcord was no longer a white redhead guy from USA but was now black I grew excited, so excited that I have a tattoo of Marlon Wayans waking up next to some white girl on my left leg, are there any more plans to change the race of GI Joe characters?

For the last quarter of 2010 and 2011 moving forward we plan to re-introduce such characters as Space Shot, Effects and Long Arm in a Target exclusive 3 pack called "Brothas in space" there will be comic book written by Larry Hama packed along with it describing a new adventure in which the three recapture the formula for Olde English Malt Liquor before Cobra can re-brand and remarket it to white males aged 18-24. We also plan on breaking a new racial barrier and making Wet-Suit an African American, proving once and for all that black people can actually swim.

2. I have noticed that such sites as GI Joe Canuck have had hasbro produced exclusives in the past, are there any plans for any other fan run sites to have their own exclusives?

There are plans to work along with JOHIO to produce a limited run figure called "Buckeye" his speciality will be alcoholism and will come packaged with a repainted vamp with a yellow DWI plate and a new playset depicting the VFW across the street from the homeless shelter in Youngstown. We feel this exclusive will mirror the spirit of the great state of Ohio.


3. We have heard rumors that several characters have been "retired" from the new toyline, what does "retired" mean? Will we ever see any of these characters again?

The moniker of "Retired" refers to a new sub-group we plan on introducing depicting characters from the GI Joe team in their post military lives, this lines first wave will include Gulf War Syndrome Dusty, Unemployed Dial Tone (with a can of beans accessory), Foam Rubber Factory Floor Manager Zap and Grocery Clerk Blowtorch, if the line is a hit we may produce some vechicles to go along with it, there will be early mock-ups of Dustys wrecked Subaru at Toyfare this year.

4. Are there any plans to release any figures that are "custom friendly" meaning, different parts that are unpainted and easily modified?


5. What are the plans for the GI Joe comic book going forward?

Well the only guy we can convince to write any of that stuff is Larry Hama, we just kinda let him write whatever he wants. Nobody actually reads any of those right? I mean I think 3 or 4 of the ones out there are ones Larry Hama made himself and mailed to different stores. Every time we tell him to try to sell some toys he gets all retarded and yells about being a serious writer and its like "Yeah whatever Larry"

That concludes it! This is all true and serious business.
Posted by Dr. Henry E. Miller at 1:04 AM 3 comments:

Ho-lee Fuck! Hisstank has a lot of horrible human beings, but when there is a thread titled: Would You Use A Girl For Joe's?

It's gonna be a doozy!

1st post:
What if there was a chick you didn't like or even thought was ugly? But, she would buy you any GI JOE stuff you wanted. No limit on how much or how much it costs. For example, she would buy you AFA Graded vintage Joe's if you wanted. Or, you come home from work and she says, "here babe I bought you 20 POC Alley Vipers, I hit every store up in the county today to find them for you."

Could you go along with it for the Joe's or would it bother you since your using her and you aren't attracted to her whatsoever.

P.S. This isn't about my life, so no comments about that please. My girl isn't ugly and only buys me some Joe's..

Sez the guy with the "I <3 Charijoe signature":

Sorry, but I'll be playing with the girl more than with the joes, so she's gotta be hot.


I assume this is about sodomy:

Are we talking fat & ugly or just plain old vanilla ugly? First case no, second case, if she will get you all the joes you want she is probably to be just as generous with "other" things, so it may not be a bad deal. You can learn to love a person.

I've used girls for less. Plus the up side is that if she's fugly she probably has some hot friends which you can bang the hell out of behind her back. Ugly girls always try harder too, so most likely you could do things to her that you wouldn't do to farm animals and you'd be rewarded with a new Hiss tank.

"That's right slut, as soon as you are done polishing the knob get your ass to TRU and get my a POC Spirit."


It's a sad day when Jr0d is the troglodyte who makes the most sense:No, I get my own joes. My wife goes once in awhile to get me one, but with that I make sure she gets something nice in return. 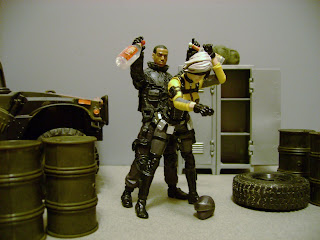 The POC snake eyes comes with a spare head and validates what we always knew. Snake Eyes is a da black brother of Black Ripcord
POC Beach Head 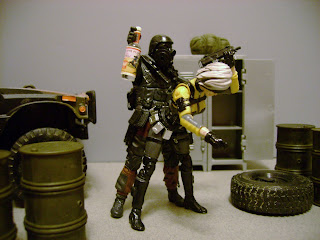 A really great figure, but he has to wear a gas mask to get over Helix's stink.
POC Jungle Duke 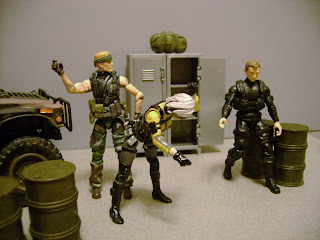 Also known as Danny. This Duke clone watches his weight, wears scarfs in his hair for attention, talks with a slight lisp, and is more interested in Mr. Bond, than Helix. Did I mention he is fabulous? 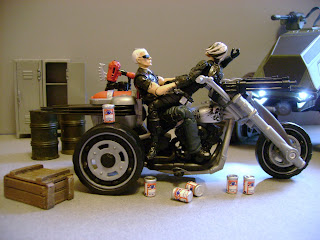 Dis motha fucka right here is pretty much the coolest figure made.... ever. His articulation sucks, but he has 4 ear piercings, 4 tats and a fauxhawk. He also comes with a nail gun, so he is obviously a roofer, which makes him da realist gang member yet. 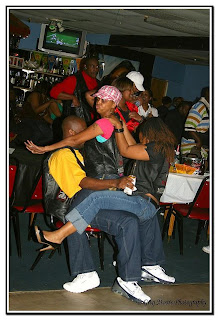 He owns da game, this is not sex, it's just motorcycle clubs cats dancing.
Posted by Future Negro at 9:02 PM No comments:

Labels: best figures ever., Don't be a Hoto, fuck u., Helix is a slut, Immortal Soulz is da coolest gang in memphis, POC Review, toys having sex, Trust us or no one, You're Gay. Rider of da storm rulez
Newer Posts Older Posts Home
Subscribe to: Posts (Atom)